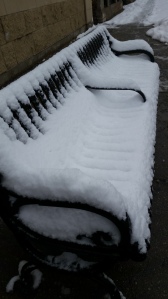 So last week, I talked about spring. I was sure it was here, that winter had given up and retreated, grumbling off to its ice cave for another year.

If you look at the comments on that spring post, you will see that I was warned that I was taunting the season, waving a pastel-colored flag in a mild breeze. Once again, I am paraphrasing.

No, I was confident.

And then this happened. See that picture over there? Right next to the text? That would be a nice representation of the enthusiastic snowfall we got yesterday. The cleared sidewalks were covered again. The roads were slippery and messy. I looked outside and suddenly we’d gone backward in time.

It’s not supposed to stay, we’re supposed to hit the 60s on Wednesday (the temperature, not the era, which I can see could be confusing, given I’d left you at going backward in time). That’s the embodiment of Chicago weather for you, but for now there’s no escaping the several inches everywhere once again.

It hasn’t stopped the work on my building, though, the hammering going as though there’s a contest among the guys attached to the side of the building by rope and a metal platform. Maybe they’re working on a new form of propulsion, who knows. Maybe that’s what keeps them up here, and, if that is the case, hammer away.

Anyway, the thing is that you can never know exactly what it is, in life, you’re going to get. The weather reports promised us a light dusting of snow; we got a respectable snowfall. But just because it snowed yesterday, it doesn’t mean it’s snowing today. Nope, today it’s bright and sunny.

With a probability of hammers.

5 thoughts on “The Unexpected Strikes Again”