One of the iguanas at the Iguana Park in Guayaquil, Ecuador.

After a night in a Fort Lauderdale airport hotel — where I’m pretty sure I saw a “working woman” on her way in, and ate a restaurant attached to a Bass Pro Shop, whoo-hoo! Florida — we boarded a plane to Guayaquil, Ecuador. We flew TAME, an Ecuadorian airline, and already found ourselves in the language minority.

We landed four hours later, over wide farmland, coming in close above winding beige rivers, large houses and their turquoise swimming pools glinting back up at us. With the gentlest of touches, the pilot landed the plane.

We were in Ecuador. Atwitter with nerves and anticipation, I grabbed my ginormous camera backpack from the overhead bin (that thing paid for itself many times over), the other passengers politely giving me berth. As a complete toady to habit, I was already far out of my element. I wasn’t yet sure how it felt.

We breezed through the airport, with everyone switching to English to accommodate as as easily as they smiled, and were met with our transport from the tour company, Pacific Tours. He was a young, tall, floppy kid who brought us outside to feed the koi in the beautifully-landscaped airport grounds as we waited for our van. For $0.10, you can get a handful of pellets, and I aimed for the small fish on the fringes, cheering when the one I threw it to actually devoured it. 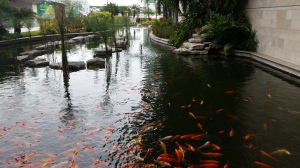 The fish. Took this with my cell phone. That’s right. In essence I had 3 cameras on me.

Ecuador is on the U.S. dollar, which made the trip incredibly simple. No conversion math, things just cost what they cost. And then we were off to our hotel, the bus lurching through tight traffic on what felt like a main thoroughfare. With the trill of trumpets, we arrived at our temporary headquaters, The Grand Hotel Guayaquil, a police officer (I think) guarding us from the streaming traffic as we exited the van.

We were greeted by bellmen in uniform, by softly smiling receptionists with perfect English, and by a beautiful tropical scent that filled the gleaming lobby. Our bags were no longer ours to handle, our rooms dispatched with cheerful efficiency, and when I reached mine, I discovered they’d given me a lovely view of the street. I was officially Somewhere Else.

We didn’t have long before we were to meet our guide, Mario Fuentes of “My Trip to Ecuador,” for our afternoon and evening tour of Guayaquil. We’d found Mario through a site called “Tours by Locals,” and he came highly recommended. He was very responsive during the planning stages, is fluent in English, Spanish and Portuguese, and we were looking forward to learning about his city from him.

Guayaquil is the city with the largest population in Ecuador, and an easy launch point for a trip to the Galapagos. I think we’d thought we’d breeze through, with the Galapagos Islands our main event.

But it was far lovelier than we expected. Mario arrived, punctual and grinning, revealing dimples in each of his cheeks. And we were off. We walked around the corner to the obligatory church, a huge one with gorgeous stained windows that suffered very little damage in the April earthquake. Like Chicago, Guayaquil also had a major fire, so the church was rebuilt in the early 20th century.

Can I tell you the name of the church? I cannot. Churches are not my thing. But, here, have some pictures anyway.

And on the outside: 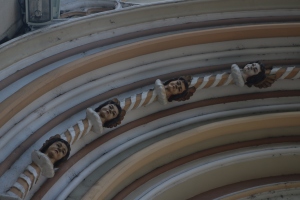 Then it was off to El Parque de Las Iguanas, or, literally, the Iguana Park. Iguanas were everywhere, along with turtles and pigeons. And very excited children. A woman sold ice cream carved off of a block, and a man tried to sell us selfie sticks on our way in and our way out. 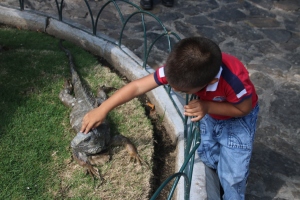 This kid manhandled this huge iguana, and the iguana did. Not. Care. 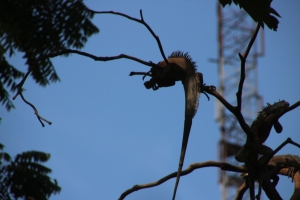 Is that a bird? A Plane? Nope. IGUANAS. 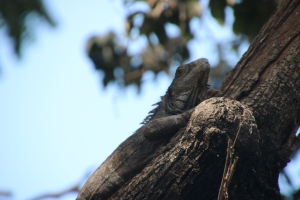 And then we were off to Las Penas. And that’s where our tour took an unexpected turn.