Now where were we? Just kidding, I totally remember, we were winding through the streets of Guayaquil, on our way to Las Penas. But let me back up just a tad.

Despite his quick smile and gregarious demeanor, Mario wasn’t feeling great. While we oohed and ahhed at the church, he went ahead to the van to take some medication.

He returned, collected his charges, and we made our way to the iconic colorful houses and restaurants that clung cheerfully to the side of the mountain.

A dogged stairway runs upward through it all, up and up an up, turning now and then, each step marked with a little plaque proclaiming your climbing accomplishment. It was there, at the base, after we’d clambered out of the van, that Mario turned to us, his dimples vanished back to whence they came, his eyes glassy, a thin sheen of sweat on his face.

He’d had a health episode a few days earlier, had to see the doctor, and he was concerned it would happen again. It was hot, very hot, and now he was worried he was feeling the same way. He needed to go to the emergency room. The only problem?

We didn’t know what to make of it, not at that moment. We knew nothing, really, about Mario. In my gut, though, I could tell he was sincere. He wasn’t well.

He suggested seeing us back to the hotel before he headed to the ER, which is probably not the most expedient way to get medical attention. I asked if there was a way we could make sure to get ourselves back to the hotel.

He said he’d take a taxi to the hospital, and leave us with the driver. He was unsure of leaving us on our own — as far as he knew, we spoke no Spanish, and we were in a strange city– but it was a major tourist attraction, dotted with uniformed officers every so often. Off he went, and there we stayed.

The site of our conversation, at the base of the steps. Well, a few up.

And at that point, for us? There was nowhere to go but up. After all, our time in Guayaquil was limited, and we wanted to make the most of our experience. 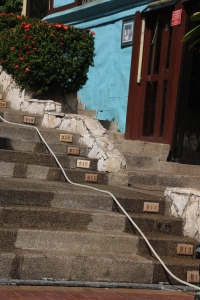 So up we went, the numbers climbing along with us, friendly greetings along the way. About halfway up, we reached a plateau.

I swear iguanas are the squirrels of Ecuador. 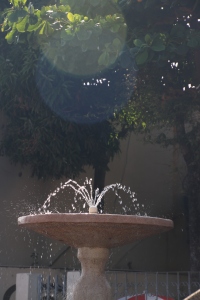 The tropical sun did what tropical sun does, and the temperature rose. Then the decision: do we head for the top? Initially, both my dad and I said yes. My mom? Nope, she was happy at the plateau. So we popped into one of the little stores, its coolers beckoning in the shaded room, glass display cases between us and the back.

There was no one there. “Hola!” we said, repeatedly. No one arrived. Finally, a woman appeared. And so did my school Spanish.

Three dollars for three enormous waters. Sounded fair to me. And I’d spoken in Spanish, and she didn’t laugh at me, she didn’t mock me. She smiled at me for the effort.

We went back to my mom to give her a water, and my dad decided he didn’t want to climb. I was on my own.

All the way up, people said hello. An officer directed me when I couldn’t find the next collection of steps. I had a passing conversation — in Spanish! Terrible Spanish, but we understood one another! — with the proprietor of a restaurant, she told me about the great food,but I said, with regret, my parents were below on the steps. This was about two-thirds of the way up.

Up I went, dorky backpack on my back, camera around my neck, my smile as genuine as the ones sent in my direction. 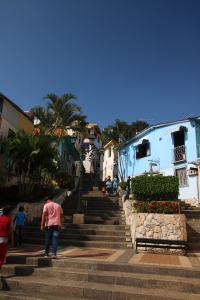 And then I reached another plateau. I was nearly at the top. And grateful for the water.

Just a little farther to go. Did I take pictures of the numbers? 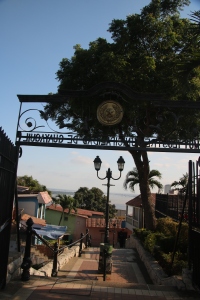 Up I went, the final haul, and then I was at the top. And my goodness, was it worth it. Guayaquil spread below me, the other hill of painted houses seemed nearly within reach, and the river remained flat and calm for as far as I could see it.

Finally thought to take a pic of the numbers on the way down. Didn’t climb back up. It was a lot of stairs! 444 total. 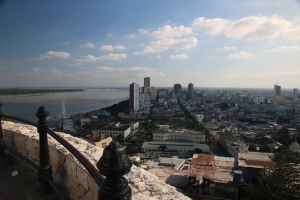 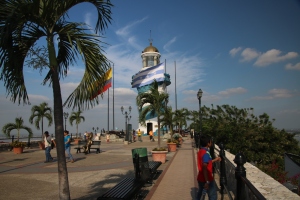 The stairs inside the lighthouse. 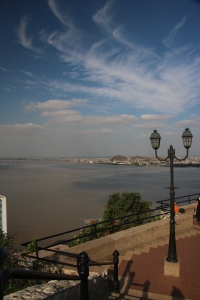 I didn’t climb to the top of the lighthouse, and not just because I’d just topped a ton of stairs. As I started to go up, I realized I’d have to make my way down that steep, tight spiral, with people going up.

I stayed up there until I’d felt I’d soaked it all in, and then it was time to go down. Funny how down always follows up.

I usually don’t post pictures of people where you can see their faces, but as you can see from their expressions, this is the most uncandid candid shot ever.

And then it was down to collect my parents, and down further still to meet our driver, still waiting, parked under the cool shade. We returned to the hotel, exhausted and concerned about Mario, and had dinner. I tried the Ecuadorian specialty, Seco de Pollo (a chicken stew) which was amazing. My dad had the same thing, but with goat, and my mom corvina, a firm white fish popular in Ecuador.

We didn’t really mind missing the evening tour, we were all exhausted, and we had a plane to catch in the morning. We were heading to the Galapagos Islands.

As for Mario, well, you’ll find out later how he was doing, as did we.