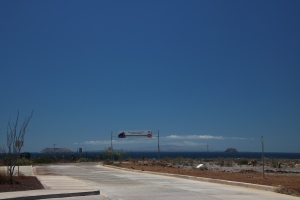 (Part 1, Part 2) I was going to attempt Flickr, but I’m having trouble with uploading. I’m right at the top of my limit here, so it’s a problem I’m going to have to solve, but we’ll see if that’s today.

Now where were we? Yes, we hadn’t yet heard from Mario, and excitement reigned: We were heading to the Galapagos Islands.

After a lovely breakfast at the Grand Hotel — my plate teeming with fried plantains — we were off to the airport. Mario e-mailed, he’d been released from the hospital late, but had tried to find us to resume the tour. We were probably at dinner at the time, as he’d called the rooms and we weren’t there. He left us chocolate at the desk.

Ecuador grows a lot of cacao, but we’ll get to it. 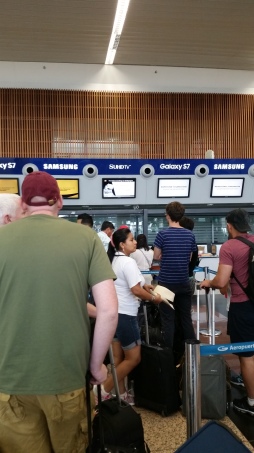 mom met a bright, chatty woman from Atlanta named Debbie, who, with her husband Tom, was on our tour, and, we discovered, would also be staying at the Isla Azul. Together we all trooped out of the van to the airport, where we learned that we needed to get in a line before we got in a line.

Due to careful environmental restrictions, everyone going to the Galapagos must swear to not having anything that could upset the ecosystem. No foods, no animals, no contact with farm animals. We paid our travel fee, and our luggage was separately inspected before we slogged over to the check-in line for the airline, lugging our approved luggage.

We boarded, and about two hours later, we were descending over glossy waters. After a quick announcement, the flight attendants, their faces stern, walked through the cabin fumigating each overhead luggage compartment, filling the plane with a surprisingly pleasant-smelling insecticide.

And then it was off and into the open airfield of Baltra, also known as South Seymour Island. We were in the Galapagos Islands. 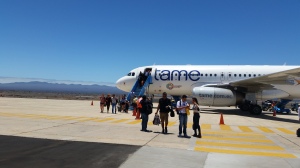 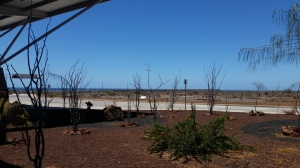 There was a feeling of isolation, of being at a place near nothing else in the world. We were the only people here, intrepid explorers, buffeted by the strong winds, air so fresh my city lungs could barely manage.

And then, before we even made into the airport building, the next plane was coming in.

To customs, one line for the Ecuadorian visitors; another for everyone else. I heard a sound above me, and looked up.

The Galapagos Islands are famous for many animals, but perhaps none so much as Charles Darwin’s finches. Though they weren’t his only subject — or even his most studied subject — they have endured as a symbol of what these islands mean to the study of evolution. In fact, the work continues on the island below, Daphne Major, where Peter and Rosemary Grant have spent 40 years watching finches evolve in real time. Their work is chronicled in the book The Beak of the Finch.

After the customs officer collected the $100 Galapagos park fee, and a quick trip to the restroom where I had to remind myself you don’t flush the toilet paper in the islands, it was time to collect our bags. The luggage was piled on a short belt, the scariest K-9-sniffing German Shepard I’d ever seen leaping over the cases, taking his job very seriously. When he finished, his handler opened a metal grate in the wall, and the dog hopped through. Two bags sat at the bullet-proof vested officer’s feet.

Another officer asked us what we’d brought, again making sure we weren’t going to interfere with the ecology of the islands, and then I was free to meet our handler from Guiding Galapagos Expeditions, Santiago, who had a sign with our name.

Santiago and I chatted away, and then I realized my dad was standing next to someone else. Who also had a sign with our name.

He was from our other tour company Pacific Holidays. Even though my dad had explained to them, very carefully, with a chart and everything, that we wouldn’t need the transfer from Baltra to our hotel. Apparently no one bothered to tell our transfer. 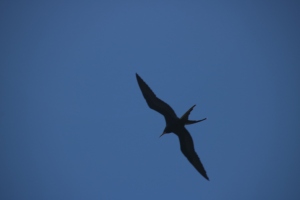 Frigate bird in flight. Huge and amazing to watch.

An explosion of Spanish later, Santiago and the other driver had it all worked out, and we were heading for our very first tour: the Island of Santa Cruz and its Highlands. (To be continued. Of course. Tomorrow: Giant Tortoises!) 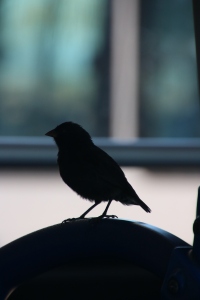 A little visitor on the bus to the ferry. It was as though he saying “I know you came to see me. Here I am!” 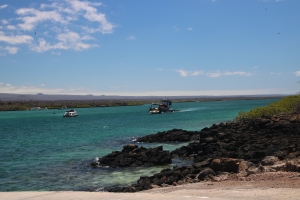 The Baltra side of the ferry crossing to Santa Cruz. 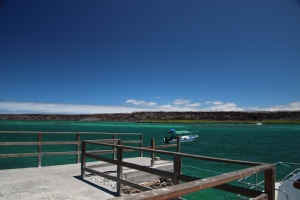 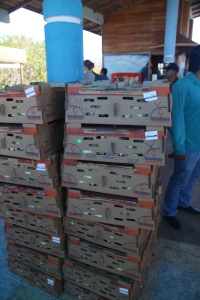 These boxes were all packed with chicks chirping away. Why? Literally no idea. 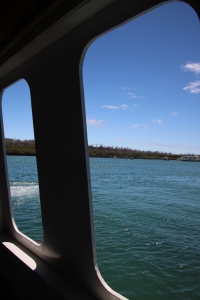 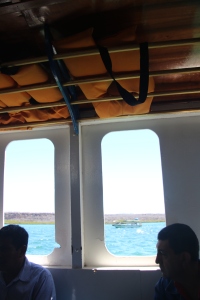