(Previous Ecuador posts) We squeezed into the back of the white pickup truck, me in the middle, my enormous camera backpack between my knees, my huge purse lodged under, our suitcases in the bed of the truck. Everything we saw was new: The trees that looked like dead sticks; the others that resembled very tall birches, only they weren’t.

The higher we went, the greener it got.

We passed a small town with small stores open to the street, wooden railings, low, single-story buildings. Santiago told us that on the weekends, there’s a market there, and people come up from Puerto Ayora, the big city on Santa Cruz.

The driver pulled over, seemingly to nowhere, but we saw some other tourists emerge from the greenery. An application of sunscreen and a donning of my hat later, and we were taking in our first Galapagos sight (and site): Los Gemelos, The Twin Craters, formed when the tops of the mountains collapsed inward due to erosion. 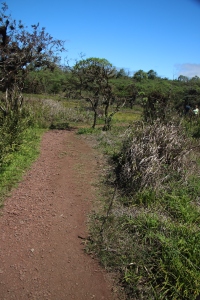 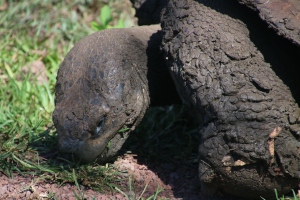 This is what it’s like to get side-eye from a tortoise. The meanie. Obviously. 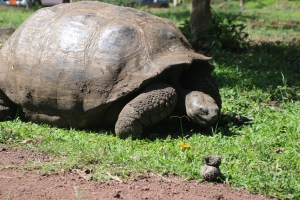 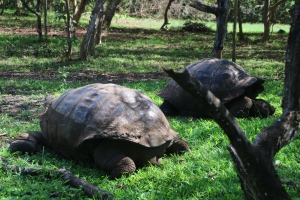 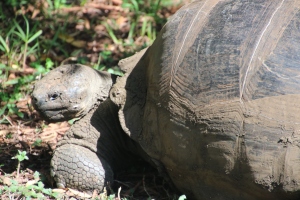 We went to a farm where you can get close to them, though you are supposed to stay a bit of a distance away, as they, like all the species of the Galapagos, are protected. Most didn’t seem to mind us at all, aside from one real meanie.

Watching them move was interesting, they put their huge, stubbly legs, each ending in a set of impressive claws, forward and heave themselves, fighting for every inch.

Then we looked at the lava tunnels, hollow tubes running under the island. We had to descend some steep stairs, but luckily, the ones we saw didn’t involve any crawling.

Unfortunately, though, my future storage problem has become my current storage problem, and one I must solve before I can post the rest of the pictures. We had a lovely meal on the farm, though, in a gorgeous outdoor dining room I’ll have to show you another day, made from a local wood which is actually invasive. Because it’s invasive, it’s used as a building material, unlike the native or endemic species (we’ll get to that), which cannot be cut.

And then it was off to our eco-hotel, Isla Azul, a lovely, quiet spot where they welcomed us with fresh juice and slight concern: Apparently Pacific Holidays hadn’t informed them either of our plans for an afternoon tour. Isla Azul is known for the gracious hospitality of its owner, Raquel, who, sadly was on vacation during our stay, though her sons pitched in and did a great job. The younger son even hoisted our heavy bags high a trooped them up the stairs to second floor.

I’d show a picture of the view from there but…as you know. No more space. Oh well.

The path to the rooms was completely open, the view below of a street, and neighborhood, eventually giving way to the Highlands in the distance. The clouds took on a pearly sheen as the day wound down, and I breathed in the crisp air, finches appearing every now and then to peer at me curiously.

Soon there would be blue-footed boobies and frigate birds, but you, like me, will just have to wait for that.