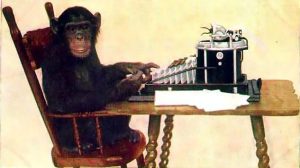 The first two were unintentional, but it just seemed wasteful not to finish it out.

Anyway, with a little bit of, hmm, how should I put this, uh, I think the word is procrastination? Maybe? I finally got myself settled, sat down and wrote. And the floodgates opened.

Not so much on the project I finally chose — something entirely new, by the way — though I hit 2030 words. But it felt like working out after a long, long hiatus, where the breathlessness is oppressive and your muscles won’t follow your brain.

I actually had to take a breather during my word sprints.

But before I went to bed, the seeds of something else planted themselves, and like bamboo, sprouted quickly. I know I have the tendency to be distracted by something new and shiny, but this morning I was drawn to the second project.

So here’s what I figure. NaNoWriMo is really about putting in the motivation to write. So if I put words into a fiction project (as opposed to a fictional project. I swear these WsIP exist!) I am going to take those words and put them in my wordy bank.

I suspect that one project will end up being more compelling than the other, but we’ll see! How’s your NaNo going?

2 thoughts on “No, I probably won’t blog about NaNoWriMo EVERY day”