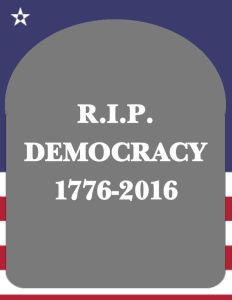 This election was about democracy. And democracy lost.

Most of us spent yesterday reeling over the concept that voters endorsed virulent hatred. Virulent hatred got the government stamp of approval. Hello open discrimination, goodbye even the veil of politeness. And that was sickening.

If you don’t think that was sickening, or you think that disgust over someone enthusiastically accepting the support of the kkk* and nazis* is nothing to get worked up over, this is where we part ways. Feel free to unfollow my blog, and go live your existence smug with the thought that you can be free from the tyranny of being polite and treating others with respect.

If you’re still with me, or if that last sentence made your stomach twinge, and you now understand what you’ve done, then stay with me. And commit to your own growth.

And so we continue.

How Trump won exposes the naked contempt of the GOP for the very fabric of our Constitution. Voting is a fundamental right, and yet, after the gutting of the Voting Rights Act by the Supreme Court — at the behest of members of the GOP — states were free to enact the kinds of laws specifically designed to stop certain voters from exercising that fundamental right.

You know who used to use those laws to prevent people from voting?

You know who utilized those laws to capture the electoral college while losing the popular vote?

The candidate supported by the kkk.

But the responsibility lies with the GOP itself, as it also used redistricting to minimize the likelihood of Democratic candidates winning the majority of districts while increasing their share of Representatives. Instead, the GOP created incredibly strangely shaped districts to increase the odds of GOP wins in the majority, while concentrating Democratic votes in others. Some of the biggest offenders?

Those states ringing a bell?

Add to that North Carolina GOPers actually bragging about how they curbed the votes of black voters, and the success of their voter suppression tactics, and you might see what I mean.

No matter what your point of view, no matter how you feel about Social Security or defense spending or health care, if you believe in the Constitution, you have to support the right of everyone to choose their government.

Not just the people who vote like you. Because that is not a democracy, it is a power grab. It is a coup. It is a subversion of the will of the people all tied up with a heaping helping of authoritarianism.

This election proved that democracy is far more delicate than we realized, and the GOP hates it far more than we realized. Even now, peaceful protests, filled with citizens who are exercising their First Amendment rights, are being characterized as “riots,” or, according to one terrifying man with too much authority, the protesters “radical anarchists.”

For exercising their First Amendment rights. And I hear this man is up for a cabinet position. As Director of Homeland Security. You know that branch of government that decides who constitutes a threat?

And we haven’t even gotten to Russian President Vladimir Putin’s involvement in the election, which Russian officials just confirmed.

So here we are, at the mouth of the tunnel to a very, very dark place. We have lost control of the “Government of the people, by the people, for the people.” And we may never get it back.

*[Refusal to capitalize kkk et.al. is not a typo but an editorial choice.]

2 thoughts on “Loser of the Election? Democracy”