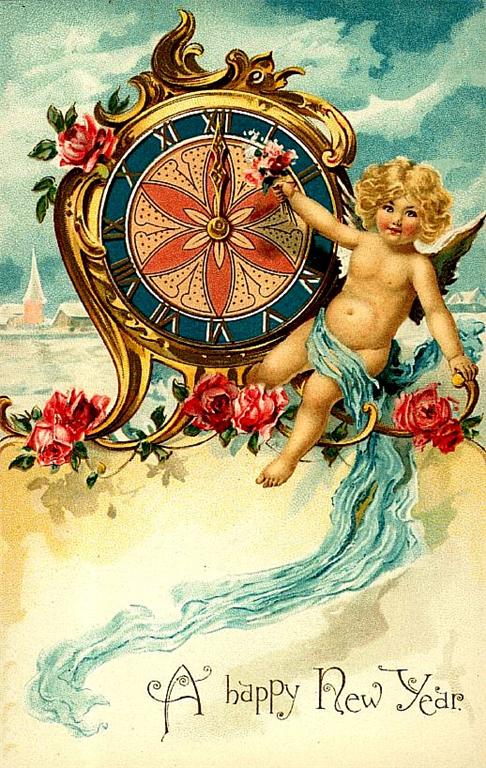 By ItsLassieTime (Self; from item in my collections) [Public domain], via Wikimedia Commons

This short story is from my collection, Better Living Through GRAVY and Other Oddities, available for free. Seems appropriate for this time of year!

In with the Old

“It’s nothing personal,” she said as kindly as she could muster, “it’s just time.”

“But I’m not nearly as used up as they said I would be,” the other one said, “not nearly at all. I’m not wrinkly, or old – I’m kind of in prime time.” She gave herself an once-over, careful not to break her bond with the contraption behind her.

“Unfortunately, we really need the machine.” She sighed and tapped her pen on her clipboard. “We only have a few more hours.”

“We?” said the woman in the machine. “We only have a few more hours? You’re going to install that thing,” she gestured with her head toward the giggling baby making faces at the man in the white coat at the other end of the room, “and go on with your routine. You think don’t have it down by now? Daily dial turnings, just one click. Then you, with that pretend-serious look, yanking that lever. You think I didn’t notice you enjoy those lever pulls? Well I did. And you do.”

“Now come on, Wanda, there’s no need to be this way. You can go out with dignity.” She shot a look across the room to her coworker. He was too enthralled with the baby to get her message for a little help.

“What am I supposed to do now? I was huge, I was everything.”

“They don’t tell you what you’re supposed to do when it’s over.” She relaxed her grip on the copper handles inside her chamber, her visible gears going slightly slack down her arm toward her shoulder, the teeth just a bit looser. The worker took that as a good sign. She quickly tamped down her encouragement, in case Wanda saw.

“There are always retrospectives,” the woman said. “You know, ‘Best ofs.’ And there’s still plenty to do in the first few months, while people are getting adjusted. You know, rent checks, 18-month calendars, that kind of thing.”

“I’m so glad you asked,” the woman said, finally able to return to her script. “You see, we have this lovely facility, all of you go there, you know, when you’re finished. Here,” she slid a glossy folded paper from beneath the clip of her board and held it toward Wanda. “There’s even a brochure.”

The pictures were bright and multicolored, with others sitting and laughing, eating, strolling by the water, the patina of their clockwork innards glinting warmly in the setting sun. It didn’t look too bad. She nearly let go of the handle to take the brochure, to open it, to see what kind of crafts there were, as promised on the cover, when she remembered.

“Wanda,” said the woman, her tone sharpening, gaining hardness around the edges, “I’m afraid you haven’t got a choice. It’s time.”

She shook her head as much as the chamber allowed, which wasn’t much. “I’m not going.”

“But what are we supposed to do with him?” She pointed her pen at the baby, who turned, stared at them and burst into a full beam, his tiny gears engaging as he reached his arms toward Wanda. “It’s his turn now. Don’t you want to give him his turn?”

Wanda closed her eyes. It wasn’t fair, she thought. It went by so quickly, her lifetime of usefulness, her purpose, and now she was supposed to retire off with the rest of them, with some anonymous body of water and a dining hall and crafts. Though crafts are nice. But still, this was her machine, it was hers.

The worker had moved away, but she could hear her talking softly, her sentences interspersed with the cluck of her two-way handheld.

“No, no, I’m telling you it didn’t work.” Something unintelligible garbled through from the other side. “No. Clamped on, completely. Like a vice.” Again, soft electronic murmuring. “It’s like Oh-Three all over again.” More garble. “What? She can’t hear me. I’m away from the chamber.” Indistinct chatter. “Fine, fine, Trinity. Like Trinity all over again.” She waited for the response. “That would probably be best.” After a long interlude of murmur, the handheld fell silent.

“Umm, Wanda?” said the worker several minutes later, the ice in her voice retreating. “I’d like you to meet someone.”

“Not interested,” she said, her eyes still closed. She knew the truth, the worker had practically said so herself, with the conversation she thought Wanda couldn’t hear. She was only a number to those people. Oh-Three indeed. “What do you call me when you’re out of the lab?” she said, her eyes still completely shut. “When you’re talking to your buddy over there at lunch or wherever it is you go?”

“Wanda,” the woman said, her discomfort obvious even to Wanda and her closed eyes.

“Wanda, really, there’s someone here you should meet-”

“Or Eleven? Do you call me Eleven? A number to you, that’s what I am after all this time.”

“I thought she couldn’t hear,” she said to someone, though Wanda wasn’t going to bother to open her eyes to see who it was. “I swear, I wouldn’t have used the technical–”

“Technical?” said another voice, a new voice, a male voice. “Technical? Really? Is that how you’re describing it?”

“Her name is Wanda, you know,” he said, his tone both relaxed and oddly engaging despite the rebuke. Wanda couldn’t help herself, she opened her eyes a crack.

“I’m Oden,” he said with a half-smile. “I’d shake your hand, but I understand your position. Obviously,” he said. His gears were slightly rainbowed with a healthy dose of age. Wanda thought they made him look distinguished.

“Replaced me, yes.” He took a step toward the chamber, careful to keep a distance. “Flip of the switch and it was me in there. And you over there,” he said, and smiled at the baby, a real smile, not a put-on one.

“The place really looks like the brochure,” he said, offering her his hand to help her to step out. She considered it, but didn’t lessen her grip on the handle.

“What about the crafts?”

He took the hand he’d been holding out and dug into his pocket, his gears gliding smoothly along. He pulled out a wallet. “I made this,” he said. “Stitched it myself.” She took in the uneven stitches and frowned. “I’m not a very good crafter,” he added quickly, “but they are fun to try.”

“Hmm,” said Wanda. She glanced at the worker who looked at the clock on the wall and back at Wanda, her face full of cautious hope. Oden set out his hand again.

“The sunsets are every bit as pretty,” he said, “and the best part is there are no more dials, no more levers. No more chamber.”

“But I like the chamber,” she said, scooting back to be further back within it.

“You like the chamber,” he said, “because all you know is the chamber. Take a leap.”

“You understand you’re not helping the situation?” Oden asked her.

She gave her chamber and the lab a final look over. She could probably make a better wallet. She could certainly make a better wallet. Maybe they’ll have pottery. Slowly, she released first her right hand and then her left, and placed it in Oden’s outstretched palm. The machine beeped behind her while the worker anxiously watched the clock, the man with the baby leaning, ready to place him.

She stepped out of the machine.

The woman grasped a crank on the side of the box and turned it furiously so that the chamber got smaller and smaller and the arms shorter and shorter. The man, watching the clock rather than her or the baby, placed the baby where she had been moments before but where she would never fit now. The baby giggled.

Without looking back, Wanda took Oden’s arm, and together, they headed toward the door. They reached it and disappeared into the flash of sudden white light.

The worker leaned against the machine, her hands shaking. “Happy New Year, everyone,” she said weakly.