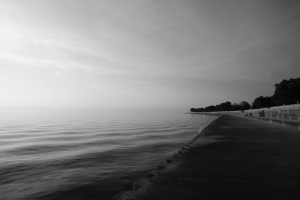 Yesterday I tried to bake a cake. Not for any particular reason; just because I don’t think I’ve ever baked a layer cake before.

It did not go well.

Both layers were gently slanted, as I placed them too close to the front of the oven. When the toothpick (bamboo skewer) came out clean, I let them cool for a bit, and when it came time to turn them out on my makeshift cooling rack, one of the layers stuck to the pan, leaving a chocolate crater. I patted the hunk back into place, and hoped for the best.

I left the other in the pan longer, and it came out, a little begrudgingly, but it came out.

Ah, but that first layer. It then stuck to the rack, falling apart into boulders of, I’m honest, not terribly good cake.

For that I blame the recipe. I followed it exactly. I’m pretty sure.

I thought I could make cake pops, which I see all the time as recipe suggestions, as the frosting turned out well. And then I figured, ah, to heck with it.

Into the trash it went.

It was, in all, a rather spectacular failure. Would it have worked if I’d just made cupcakes? Probably, though I still wouldn’t have loved the cake itself.

The point is the trying.