It feels unfair even though it is November and this is Chicago. Still, somehow it’s like we’re getting the short, icy end of the stick.

They’re the small, mean flakes too. Those are the ones you have to watch out for, they’re all business and accumulation.

It was a busy weekend, though I couldn’t tell you precisely with what, it just was. Saw a bunch of NaNoWriMo posts on twitter…or at least one I clearly recall, and all it did was make me glad I wasn’t feeling that pressure.

Editing has been slow, especially with my glitch, but I’m hoping to pick it up a little this week. I have errands to run, but I’m going to have to keep an eye on the weather.

Meanwhile, I’m getting to it. You have a great Monday.

Check out  my full-length novels:
Aunty Ida’s Full-Service Mental Institution (by Invitation Only)
Aunty Ida’s Holey Amazing Sleeping Preparation (Not Doctor Recommended)
Her Cousin Much Removed
The Great Paradox and the Innies and Outies of Time Management.
And download Better Living Through GRAVY and Other Oddities, it’s quick and weird!
Peruse Montraps Publishing
Like my political side? Read my opinion pieces here. 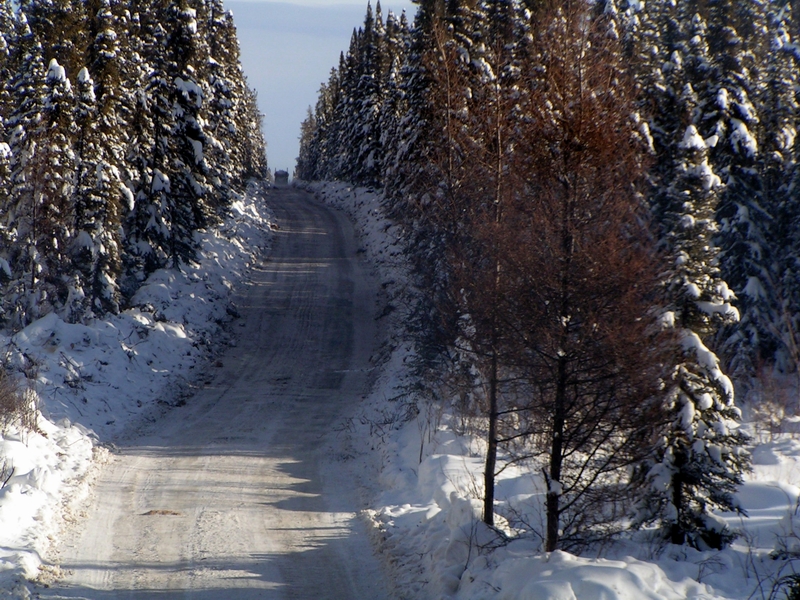 Well, the promised snow arrived and we are in a definite winter wonderland here in Chicago. The most notable part: the quiet. It also brings to mind my current new TV obsession, “Highway thru Hell.”

Its jaunty title isn’t the best part, believe it or not. It’s a show about a recovery tow team in the mountains of British Columbia, and it’s the best lesson of what not to do on icy roads. Because apparently trucks flip over.

Biggest lesson? Slow down. Most of the accidents are speed-related. Slow down.

We rush so many things in life. We rush to get through things, to get to the end of things, and with that hurry, we make mistakes. We make decisions we probably shouldn’t have made. And those decisions can change everything.

That’s true of writing. We focus on our volume, on word count, on how far we can get and how quickly; I’m guilty of this practice too. You know my favorite writing tool is the timer.

Word count is such a nice metric to follow, you can graph it easily and watch your progress, but that can lull us into the belief that the goal is the finish line, not the story itself.

Watch for ice in the road. Watch for warning signs.

So you may have heard we had a huge snowstorm here in Chicago. About 20 inches of snow fell over a day, turning cars into unrecognizable lumps, loading up the branches of trees, coating the roads nearly as quickly as they could be cleared.

I stayed in and watched it from a distance, cozy inside, the sounds of the world muffled by the snow.

But the thing I found remarkable was that there were people out in it. People jogging in the paths of the park as though it wasn’t any different than any other run; dogs frolicking with a level of glee I could see all the way from my window. People on snowshoes. Cross-country skiers.

Even one of the worst blizzards in Chicago history — officially, it is the 5th largest — didn’t stop Chicagoans who wanted to be outside. In fact, a friend sent me a pic of her very determined 4-year-old son, bundled from toe to helmet, sitting on his training-wheel-supplemented-bike on a freshly-cleared sidewalk.

It’s even in the kids.

There will always be barriers in life. There will always be snowstorms, some so heavy it seems like snowing is the new permanent weather. We can lament the snow. We can complain about it, and we certainly do. We can exchange wry smiles in the elevator, smiles that acknowledge that we know it’s there and get on with it anyway.

And sometimes, even at its darkest, even when it falls in impossible sheets, when the break comes, we can go out and play in it.

Everything looks icy today. The ground, the lake, the sky; it’s all a uniform shade of dull white, the kind with enough gray in it to make it heavy.

It’s been a long winter, and there is yet more to go still. I’m told the groundhog saw his shadow. I don’t think we needed his prognostication.

It snowed again last night. The dire predictions piled up like the not-yet-fallen snow was supposed to, lots of snow, traffic-snarling snow.

So I tucked in and the wind howled, and I prepared to open my blinds to a world of white and car-trodden gray, under a flat sky. Nope.

Not this time, weather.

Only a polite covering and passable streets and fluffy, light clouds in the sky.